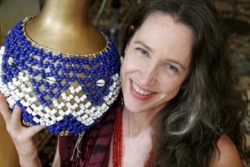 Beverly Botsford is a cross-cultural percussionist and educator; blending music, movement, and spoken word in solo and ensemble presentations.  Embracing drumming traditions and inspirations of Africa, Cuba, South America and her native North Carolina, she weaves colorful rhythmic tapestries with her infinite array of collected and homemade instruments.

Beverly celebrates more than 30 years of full-time, professional experience, performing and teaching in an infinite variety of situations.   Highlights include 13 years of touring with Chuck Davis and the African American Dance Ensemble as well as more than a decade on the faculty of the American Dance Festival. Over the years, she has shared her passion for rhythm and culture in hundreds of school and community residencies, workshops and performances, in solo and ensemble presentations.

Since 1998, Beverly has toured internationally with Grammy nominated jazz vocalist, Nnenna Freelon in such venues as the Kennedy Center, the Hollywood Bowl, and the Umbria Jazz Festival.   Television credits include appearances on CBS “Good Morning”, BET Jazz, UNC-TV’s “Our State” and WRAL’s award winning, “Smart Start Kids”.  Recent highlights include performing in Hawaii for the President and First Lady Obama along with 200 Heads of State from around the world.

Beverly offers a variety of solo and ensemble performances as well as workshops and residencies. She tailors presentations to the needs of the presenter, the audience and in educational settings, to the curriculum. She is on the education and touring roster for the NC Arts Council as well as  Alternate ROOTS, www.alternateroots.org, intersecting arts and activism to The language of rhythm is universal. Her goal is empowerment, enlightenment and inspiration for people in all walks of life.

Students will understand music in relation to history and culture. They will understand connections to drumming and language and will have a deeper understanding of rhythm and pattern in music, speech and across the curriculum. Highly interactive with call and response, body percussion, song and movement. Connections with music, social studies, language arts. The program can have a specific cultural or curriculum focus such as the music of Africa, Latin America, jazz connections OR language arts integration with stories, poetry and other text.

Depending on the audience size, appropriate performance space and sound reinforcement – PA system with at least 1 mic and an extra input for my wireless headset microphone. Help with tech set up and sound check. Two large tables, 8 chairs with no arms, water, CD player. Access to space one hour prior to the performance. Access to closest load in and help with equipment if possible.

ALL PRICES ARE NEGOTIABLE. Inquie about block booking discounts.

L3 (specifically grades 3-8): Apply knowledge of language to understand how language functions in different contexts, to make effective choices for meaning or style, and to comprehend more fully when reading or listening.

**** These music standards are the same across multiple grade levels. There are connecting objectives in each of these categories for multiple grades.

From the Social Studies K-8 Standards: