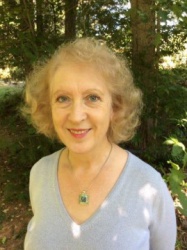 A native of the former West Germany, I immigrated to North Carolina 45 years ago. Over a 20 year period I volunteered for several organizations and institutions, including Catawba Co. 4-H, Catawba Co. Schools, the Hickory Museum of Art, and Lenoir-Rhyne College in various capacities, such as youth leader, art docent, and competition judge. In 1991 I was instrumental in co-founding the Hickory Writers Group. Since 1998 I have been registered on the roster of the Mountain Arts Program and have served numerous residencies as writer and book artist in western North Carolina schools. In 2005, I was accepted to the roster of the South Carolina Arts Commission’s Art in Education program, and in 2008 I gained acceptance to the ArtStart program and subsequently the ASC Educator Provider Directory in Charlotte-Mecklenburg.

Some of my prose and poetry has been published in magazines and journals, such as 4-H Leader, Junior Trails, My Friend, Branches, and Sanctuary. In addition, I served as co-editor for Out of Their Minds, a 1995 collection of prose and poetry written by members of the Hickory Writers Group. In 2003 I was chosen as an Elizabeth Daniels Squire Writer-in-Residence at Peace College.

I have taught numerous artist book workshops for organizations and institutions, including the Turchin Center in Boone, Hickory Museum of Art, Girl Scouts, 4-H, John C. Campbell Folk School, and many more.

In 2007, the South Carolina Alliance for Art Education awarded me a scholarship to a teaching artist seminar with Randy Baron. The United Arts Council of Catawba County has also awarded seven Innovative Artist Grants to me to implement the community projects Capturing Creativity (2005), Shapes of War (2008), three high school residencies (2010), and numerous elementary school residencies (2012, 2013, 2014, and 2015), which integrated writing with book arts.  In addition, I received a Regional Artist Grant (2006) to study papermaking at Penland School for the Arts, a grant from the Arts & Science Council of Charlotte-Mecklenburg enabled my participation in the weeklong Lincoln Center Institute’s International Educator Workshop in August 2011, and a grant from the NC Arts Council paid for tuition for the Lincoln Center Institute’s International Advanced Educator Workshop in July 2012.

During the first session, I introduce the artist book concept by showing and explaining various types of artist books, explaining how the content of the writing can be incorporated into the book construction. Following, I teach students how to decorate paste papers, which they will use for book covers and collage inside their books. During following sessions, students learn how to fold an artist book, such as an origami book, a secret room book, or a spiral book, and add paste paper covers. Afterwards, we brainstorm a topic, which has either been requested or approved by the teacher, such as being thankful, my special place, Christmas, my timeline, or even abstinence, and then students pre-write personal prose/poetry based on the topic. When applicable, I include art images, for example memory paintings by Minnie Reinhardt for the special place topic, as well as related music and poetry into the discussion process. After completion of the first draft, I introduce various writing activities, incorporating elements of writing, to encourage students to practice better writing skills. These activities include poetry writing, e.g. the cinquain, diamante, or amulet, as well as finding descriptive synonyms for hackneyed words. Toward the end of the residency, students complete their books by transposing their revised prose or poetry onto the book pages and illustrating it with drawings, collages, or photographs. On the last day, students share their work with classmates.

In addition to the book arts program, I also teach papermaking by recycling scrap paper and adding inclusions, such as flower petals and yarn fibers.  Each student will create at least one piece of recycled art paper during those visits.

Any time school is in session.

Classrooms with running water are helpful but not necessary

I will travel to the school or workshop location. Fee includes travel expense.

For papermaking workshops, please call or email to negotiate the number of students, time frame, and fee.

I am fluent in German and would be happy to integrate German language activities into a residency.

I can teach students to make a simple artist book during one classroom session.  Teachers can integrate it into the curriculum after my visit.

I require a contract prior to residency.