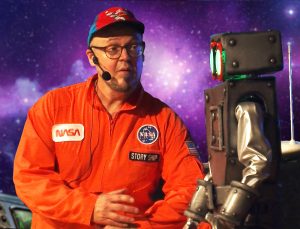 Interactive animated shows – animated stories on a big screen with characters that talk with the audience and live actors.

The Wand Of Dreams (Math Show)

“The Wand Of Dreams”
(A Mathematical Fairy Tale)

The land of “Happily Ever After” is in big trouble. The Wand Of Dreams has been stolen and everything is falling apart! Fairy Godmother or Godfather and the audience have to round up the usual suspects to solve the mystery. Each suspect offers an interesting mathematical problem to solve as the mystery unfolds. You’ll meet a Magic Mirror with a messy cold, a Dirty Rat with some pretty shady friends, a Troll that has traffic backed up for hours, a narcoleptic Sheriff that can’t stay awake long enough to figure anything out, Five Little Piggies with some really big problems, and a Dragon that loves bacon! The show combines hilarious puppets, beautiful animation, spellbinding magic, wonderful music with tremendous audience interaction. The set has big screen animation, lots of magical props and musical instruments. This is our best show yet!

Setup: 30 minutes to 1 and 1/2 hours depending upon the performance space.

Tech Requirements: One Chair, One Table 6’X2′ and one Electrical Outlet (We bring the rest!)

One Table 6’X2′ and one Electrical Outlet

Two or More Schools or Venues in Your Area Block Booking On The Same Day:
$100 off the above pricing.

R1 – Read closely to determine what the text says explicitly and to make logical inferences from it; cite specific textual evidence when writing or speaking to support conclusions drawn from the text. (Students read text, view graphics and animations that accompany a mathematical mystery. The theatrical skits, texts and graphical animations give clues to how to solve the mystery.)

R2 – Determine central ideas or themes of a text and analyze their development; summarize the key supporting details and ideas. (Evidence for solving the mathematical mystery is given on a large screen video during the show. Details given found in the theatrical skits, animations and graphics help the students to use analytical skill to solve the mystery.)

R7 – Integrate and evaluate content presented in diverse media and formats, including visually and quantitatively, as well as in words.* (The set includes a large video screen with projected animation and graphics and sound to help students measure and understand mathematical concepts.)

From the Math Standards:

CC-1.OA Represent and solve problems involving addition and subtraction. 1. Use addition and subtraction within 20 to solve word problems involving situations of adding to, taking from, putting together, taking apart, and comparing, with unknowns in all positions, e.g., by using objects, drawings, and equations with a symbol for the unknown number to represent the problem.

CC-2OA Work with equal groups of objects to gain foundations for multiplication. 4. Use addition to find the total number of objects arranged in rectangular arrays with up to 5 rows and up to 5 columns; write an equation to express the total as a sum of equal addends.

CC-3.NF 1. Understand a fraction 1/b as the quantity formed by 1 part when a whole is partitioned into b equal parts; understand a fraction a/b as the quantity formed by a parts of size 1/b. 3. Explain equivalence of fractions in special cases, and compare fractions by reasoning about their size. a. Understand two fractions as equivalent (equal) if they are the same size, or the same point on a number line. b. Recognize and generate simple equivalent fractions c. Express whole numbers as fractions, and recognize fractions that are equivalent to whole numbers. d. Compare two fractions with the same numerator or the same denominator by reasoning about their size. Recognize that comparisons are valid only when the two fractions refer to the same whole.

From the Information and Technology K-5 Standards:

K-5.TT.1 – Use technology tools and skills to reinforce classroom concepts and activities.

K-5.C.1 – Use movement, voice, and writing to communicate ideas and feelings.

Because The Story Ship’s acceptance of a performance agreement may cause it to turn down other work, the parties agree that if for any reason the services are canceled by the Presenter, Presenter must reschedule the event at the Presenter’s and Story Ship’s earliest convenience or pay 100% of the agreed fees.