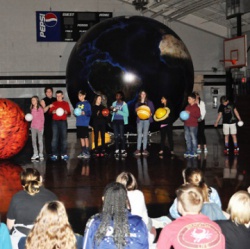 SparkPoint Innovations is a teacher-owned company working to ignite a passion for science in students. We are experienced classroom teachers who love bringing science concepts to life in new ways that students will never forget. Our classroom experience, knowledge of grade level curriculum and fast-paced teaching style allow us to lead students through an interactive series of grade-appropriate lessons covering the difficult to teach concepts of earth science.

The Big Canyon Balloon earth science program delivers geology content to elementary and middle schools all over the southeast US. Teachers and administrators love the alignment to NC Science standards and the unforgettable reference for students. These hard to teach earth science concepts are a snap for students when they are recalling information for the Science EOGs and NC Final Exams after experiencing The Big Canyon Balloon!

We stay the entire school day. Each session can accomodate up to 4 classes/100 students. Larger schools may need to book a second day in order for all students to experience the program OR choose which grade levels will participate.

The Big Canyon Balloon must have room for a 40 foot wide inflatable. The inflatable is 15′ deep and the ocean tarp in front is another 15-20′. Space beyond the tarp is needed for student seating for the instruction that takes place in front of the teaching model.

Our inflatable model requires a minimum 15′ ceiling – including beams or fans or lights that may drop down. Access to at least two standard electrical outlets and exclusive use of the gym or multi-purpose room during school hours. We require access to the room for one hour before first program and 45 minutes after for set up and take down. Teachers (or equivalent supervisor) must be in attendance, one per class of students.

We travel to your school, set up the models in your gym and stay for the whole day teaching grade level groups!

We book for the full school day, including one hour for setup before school and up to one hour for take down after school.

$1,700 for one full school day, all costs included. This is an exclusive price for ASC grant-funded programs. If not using ASC funds, please contact us for pricing.

Larger schools (>750) will need to book a second day in order for all students to experience program, or choose which grade levels will attend. Both days will be discounted by $200.

Schools that book both of our programs will also receive a discount off of each program.

Promotional discounts and/or raffle prizes will be honored.

CCSS.ELA-LITERACY.CCRA.SL.2
Integrate and evaluate information presented in diverse media and formats, including visually, quantitatively, and orally.

CCSS.ELA-LITERACY.RST.6-8.9
Compare and contrast the information gained from experiments, simulations, video, or multimedia sources with that gained from reading a text on the same topic.

K.P.1.2 Give examples of different ways objects and organisms move
K.P.2.1 Classify objects by observable physical properties
K.E.1.1 Infer that change is something that happens to many things in the environment based on observations made using one or more of their senses.

1.E.2.1 Summarize the physical properties of Earth materials, including rocks, minerals, soils and water that make them useful in different ways.

3.P.1.3 Explain the effects of earth’s gravity on the motion of any object on or near the earth.
3.E.2.2 Compare Earth’s land features (including volcanoes, mountains, valleys, canyons, caverns, and islands) by using models, pictures, diagrams, and maps.

4.P.2.3 Classify rocks as metamorphic, sedimentary or igneous based on their composition, how they are formed and the processes that create them.
4.E.2.1 Compare fossils (including molds, casts, and preserved parts of plants and animals) to one another and to living organisms.
4.E.2.2 Infer ideas about Earth’s early environments from fossils of plants and animals that lived long ago.
4.E.2.3 Give examples of how the surface of the earth changes due to slow processes such as erosion and weathering, and rapid processes such as landslides, volcanic eruptions, and earthquakes.

5.P.1.1 Explain how factors such as gravity, friction, and change in mass affect the motion of objects.

6.E.2.1 Summarize the structure of the earth, including the layers, the mantle and core based on the relative position, composition and density.
6.E.2.2 Explain how crustal plates and ocean basins are formed, move and interact using earthquakes, heat flow and volcanoes to reflect forces within the earth.
6.E.2.3 Explain how the formation of soil is related to the parent rock type and the environment in which it develops.

8.E.2.1 Infer the age of Earth and relative age of rocks and fossils from index fossils and ordering of rock layers (relative dating and radioactive dating).
8.E.2.2 Explain the use of fossils, ice cores, composition of sedimentary rocks, faults, and igneous rock formations found in rock layers as evidence of the history of the Earth and its changing life forms.

Cancellation fee is $750. We are happy to reschedule within the school year in the event of inclement weather or other emergencies. Please be aware that our program instructor will be traveling from Atlanta, GA.