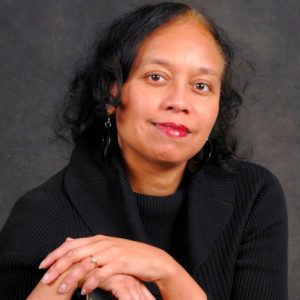 View more
Grace C. Ocasio’s educational background is primarily academic.  She taught several levels of English Composition part-time and full-time at Central Piedmont Community College from 1995 to 2003.  In addition, she also taught remedial, first-level and second-level college English at York Technical College; 1996-1998, 2003-2008.   However, teaching Creative Writing at CPCC was, by far, her favorite endeavor in the classroom.  Primarily a poet who dabbles in writing nonfiction (personal) essays from time to time, her nonfiction has appeared in The Charlotte Observer and InterRace.   Recently, she placed as a finalist for the 2015 Aesthetica Creative Writing Award in Poetry.  She is a recipient of the North Carolina Arts Council Regional Artist Project Grant.  Her honors include winning honorable mention in the 2012 James Applewhite Poetry Prize, the 2011 Sonia Sanchez and Amiri Baraka Poetry Prize, and a 2011 Napa Valley Writers’ Conference scholarship.  Her first full-length collection, The Speed of Our Lives, was published by BlazeVOX Books in 2014.  Her poems have appeared in Black Renaissance Noire, Rattle, Court Green, Earth’s Daughters and BlazeVOX.  Her chapbook, Hollerin’ from This Shack, was published by Ahadada Books in 2009.  She is an alumna of The Watering Hole Retreat, a Soul Mountain Retreat fellow, Fine Arts Work Center and Frost Place Alumna, and member of the Carolina African American Writers’ Collective.  She also served as a reviewer for the online writers’ resource, The Review Review in 2008 and 2009.  In addition, she served, from May 2013 to May 2016, as a contributing editor for Backbone Press.  Other organizations she is affiliated with are the North Carolina Poetry Society, the North Carolina Writers’ Network, and the Charlotte Writers’ Club.  She has read at venues that include the Harvey B. Gantt Center for African-American Arts and Culture in Charlotte, North Carolina, North Carolina A&T State University in Greensboro, North Carolina; the Florence Griswold Museum in Old Lyme, Connecticut; the East Bay Meeting House in Charleston, South Carolina; UNC Chapel Hill’s Bull’s Head Bookshop in Chapel Hill, North Carolina; and the Sensoria Festival at Central Piedmont Community College in Charlotte, North Carolina.  She received her MFA in Poetry from Sarah Lawrence College, her MA in English from the University of North Carolina at Charlotte, and her BA in Print Journalism and English from Howard University, graduating cume laude.
View less

My Name is Grace: I like Write Performance & Each One Teach One Workshop

Poet/Performer Grace C. Ocasio is at home reciting in cafes, libraries, and poetry slam venues as well as colleges and universities. Her performance style is part Gil Scott-Heron, part Angela Davis, two early role models of hers. She draws a lot from history when writing her poems. Examples of historical/contemporary figures she has written on include Matoaka (famously known as Pocahontas),

Poet/Performer Grace C. Ocasio is at home reciting in cafes, libraries, and poetry slam venues as well as colleges and universities. Her performance style is part Gil Scott-Heron, part Angela Davis, two early role models of hers. She draws a lot from history when writing her poems. Examples of historical/contemporary figures she has written on include Matoaka (famously known as Pocahontas), Mother Hale, Angela Davis, Audrey Hepburn, and Anne Frank, to name a few. A great admirer of the performing arts (acting in particular), she credits Judy Garland, Ruby Dee, Cicely Tyson, and Barbra Streisand for inspiring her to add elements of drama to her performance (reciting of poems). In addition, she occasionally performs as a historical character as when she portrays Sojourner Truth (“Ain’t I A Woman”). Thus, Ms. Ocasio focuses on teaching students about modern historical figures who have inspired her.

As a performer, Ms. Ocasio prefaces her poems on contemporary American and European figures with biographical information that highlights major points on such figures. Ms. Ocasio also encourages students to ask her questions on the figures as to what specific characteristics they possessed that make them great role models for future generations of Americans. In turn, Ms. Ocasio solicits responses from her audience as to who their present-day role models are and challenges them to write poems on their heroes. Time permitting, students will be encouraged to pen a few lines on their favorite figures. Ms. Ocasio also informs students regarding her writing process when writing poetry as well as discussing her background as a poet––how she got her start and developed as a poet.

Regarding my workshop approach, I seek to empower youth (young women in particular) to strive to be the very best individuals they can be. Through relating my own experiences via childhood memories of family triumphs and trials, I aim to inspire young people to press on in their own lives. In essence, I see myself as a coach/mentor. That is, I do all I can to encourage youth individually and collectively. There are times when I, as an educator, need to focus my attention on individual children. At other times, addressing youth as a group is most effective. One-on-one dynamics involve listening to youths’ concerns (not just about what is going on in the classroom but also factors in their home environments that impact their success in the classroom). The group dynamics involve working with youth to master the language (vocabulary) of poetry. Thus, I equip students with knowledge of elements of poetry, lead them in discussions of individual poems, and solicit group response to poems. In addition, I expose students to history by having them engage with poetic texts that help them grapple with the most compelling issues of modern times: antisemitism, race relations, sexism, ageism, and so on.

My overriding goal, then, is to help students feel comfortable and confident about reading and writing poetry. Although my teaching experience has been obtained by teaching primarily adult learners, I work to provide young learners with the same skill sets as adult learners, only at a more basic, age-appropriate level. In a classroom setting, I share artifacts of culture in the form of the arts (music, dance, visual art, and drama). It is my hope that integrating the arts into class assignments will stimulate my students to want to know more about the world at large. To illustrate, I might have students listen to an early contemporary song as a way to learn about a specific subject (love, death, war, family unity) and then ask students to write about that subject using a specific prompt (assignment). (Students will be provided a prompt on a given subject and be asked to address the prompt during class time.) Students will then be asked to share their creative work and receive feedback as to how well they have addressed their prompt from fellow students and from me.

R2 Determine central ideas or themes of a text and analyze their development; summarize the key supporting details and ideas. (In our case, we will examine how and when the elements of poetry appear in any given poem.)

W3 Write narratives to develop real or imagined experiences or events using effective techniques, well-chosen details, and well-structured event sequences. (In our case, we will work from a writing prompt; students will develop a poem based on the prompt.)

SL3 Evaluate a speaker’s point of view, reasoning, and use of evidence and rhetoric. (In our case, we will discuss perspective in a poem: if the poem is told from first-person, second-person, or third-person point of view and how a specific point of view impacts the meaning of the poem.)

Theatre C1 Use movement, voice, and writing to communicate ideas and feelings.

Theatre CU.1 Analyze theatre in terms of the social, historical, and cultural contexts in which it was created.

Cancellation Policy: I charge half my fee price, which would be $150.00, performance and workshop combined, in the event of a cancellation on the part of a given school if cancellation takes place less than ten days prior to the event.