There are no recent bookmarks. 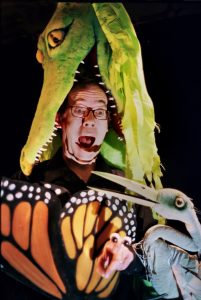 Hobey Ford is known for excellence in puppetry performance and craft. His intricate shadow puppetry work and creation of the original rod puppets, the “Foamies”, have earned him a place on stages across the world. Hobey is a two-time winner of puppetry’s highest honor, the UNIMA Citation of

Hobey Ford is known for excellence in puppetry performance and craft. His intricate shadow puppetry work and creation of the original rod puppets, the “Foamies”, have earned him a place on stages across the world. Hobey is a two-time winner of puppetry’s highest honor, the UNIMA Citation of Excellence, and recipient of three Jim Henson Foundation grants. He utilizes his artistic study at The State University of New York at Purchase and the University of North Carolina at Asheville to design and construct all of his Golden Rod Puppets and the beautiful sets that surround them. Hobey also draws on his early experiences growing up in coastal Connecticut or living in a Nevada Native American community in writing the scripts for some of his performances. For nearly thirty years, Hobey has widely toured his Golden Rod Puppets. Last spring Hobey was in Manama, Bahrain at the Spring of Culture Festival.  He has performed at the Puppeteers of America Festival in Atlanta, & the International Festival in NC as well as numerous international children’s festivals in North America.  His educational programs have taken him into schools across the country.  In the past 3 years, in addition to his school performances, he has performed in performing arts centers including the Kennedy Center and Wolf Trap in DC, Playhouse in the Park in OH, Irving Arts in TX, LA Music Center in CA.  Hobey has also performed in numerous libraries and taught at teacher institutes in many states.

Hobey tours a repertoire of up to six performances for preschool to middle school students and family audiences, including: his newest performance Sea Songs, ‘Animalia’, ‘Migration’, ‘World Tales, ‘Turtle Island Tales’, ‘The Ant and the Grasshopper and More’ and ‘The Rainbow Bridge and Other Tales.’ Each performance is accompanied by a teacher study guide. The performances

Hobey tours a repertoire of up to six performances for preschool to middle school students and family audiences, including: his newest performance Sea Songs, ‘Animalia’, ‘Migration’, ‘World Tales, ‘Turtle Island Tales’, ‘The Ant and the Grasshopper and More’ and ‘The Rainbow Bridge and Other Tales.’ Each performance is accompanied by a teacher study guide. The performances are based on stories adapted from various cultures as well as nature  and they incorporate a variety of puppetry styles:  Bunraku, rod, marionettes, “Foamies” and shadow puppetry.

SEA SONGS (PreK – 5th and Family): Hobey Ford’s newest production, Sea Song, is the story of a boy’s discovery of the natural world at the seaside. This production follows the life cycle of the sea turtle and the fragile interwoven environment of animals living at the edge of land and sea. Sea Song is performed in the style of Ford’s Animalia series featuring his beautiful carved foam animals performed in full view of the audience.

ANIMALIA (Pre-K-6th grades and Family); ANIMALIA explores the world of animals through movement, music and visually stunning puppetry. Breaking out of the traditional puppet theater booth, Hobey Ford turns the whole theatre into his performance stage. The performance includes a magnified look at butterfly and frog metamorphosis, the world of birds and a classic undersea ballet of whales, frolicking dolphins and otters. The audience will witness the magic of beautiful, animated, carved foam puppets, each one a work of art. In creating these “Foamies,” Hobey carefully studies each animal’s characteristic movements; he then designs various control mechanisms to make the puppets move in a life-like manner.

MIGRATIONK (5th grades and Family); MIGRATION is Hobey Ford’s sequel to “Animalia.” It is the story of Beatriz, a girl who journeys with her family from her home near Mexico City to the US. Hobey Ford turns to the natural world of animals to explore the wonders of migration as they are learned through the eyes of a child making her own migratory journey. Hobey’s “Foamies” are performed behind a projection of original animated scenes, taking the audience along with Beatriz on the journey of these incredible creatures. Hobey performs in full view as storyteller, puppeteer & animator in a seamless and almost hypnotic dance between the puppeteer, puppets & original artistic scenery.

TURTLE ISLAND TALES – UNIMA Citation of Excellence (2nd-6th grade & Family); Turtle Island Tales is a performance of songs and stories of Native Americans, told through puppetry.  This production was funded by the Jim Henson Foundation and utilizes shadow puppetry and a life sized realistic Native American singer puppet.  The shadow puppetry is performed before beautiful painted scenes.  The production features three tales:” Raven Steals the Sun” (Haida), “The Gift of Fire” (adapted from Semu Haute, a Chumash elder), “Antelope Carrier and the Thunderbirds” (Arikara).  The singer character leads us into the stories and returns to close.

TALES OF LIGHT (K5th grade); Master storyteller and puppeteer, Hobey Ford, shines the spotlight on three Native American tales teaching about light and life.  December is the season of light as we celebrate the turn from the darkest day of the year back toward the sun and longer days of light to come.  The native people told numerous stories about fire and the sun to teach not only about light and warmth but to shine a light on many life lessons. “Little Grandmother Spider Woman”- A Cherokee animal tale from North Carolina about the danger of fire. The story is also about false pride and boastfulness, or in other words, bragging. Through the story, we also learn about an important craft of the Cherokees: pottery.  “Raven steals the sun”- This Haida tale tells of Raven the Trickster’s antics in stealing back the sun from a selfish chief who keeps the sun in a box for only himself.  “The Gift of Fire”- After gifts were given to all creatures but man, hummingbird flies to the sun to bring back a gift for man. Man discovers the uses and dangers of fire in this cautionary tale.

THE RAINBOW BRIDGE AND OTHER TALES – 2010 UNIMA Citation of Excellence (1st-6th grades and Family); This shadow puppetry production brings to life three folktales through Ford’s unique presentational style combining stunning puppetry, storytelling and topical educational themes.  The stories include “The Rainbow Bridge”, “El Coqui” and “The Three Billy Goats Gruff”, with a finale of his Peepers Puppet, which turn the bare hand into a myriad of creatures and his famous beautifully carved foam animal creatures he calls the Foamies.  His productions touch on themes across the curriculum with an emphasis on his art form.

The Rainbow Bridge is a Native American folktale of the Chumash, a tribe who inhabited the southern coastal regions of California.  The tale recalls the origins of the Chumash on Santa Cruz Island.  The people received the gift of fire with it the means to develop and flourish until they became overcrowded were forced to migrate to the mainland on a rainbow bridge.  The tale also tells of the ones who didn’t make it across, but fell into the sea becoming dolphins.

El Coqui is a Puerto Rican folktale about how the little tree frog got his song.  The animals of the lush rain forest had become lazy on their island paradise until a race was set which forced the animals to get in shape.  Little Coqui worked extra hard, being so little, and his efforts led him to win the race.  He was rewarded with his famous song : “coqui coqui, coqui…”.

The Three Billy Goats revisits this classic Nordic tale with humor and issues of the day.  When the long winter has finally come to an end, The Billy Goats Gruff have exhausted the resources of their meadow and must migrate to the upper meadows.  To do this they must cross a bridge where a troll stands guard to prevent their passage.  They use the ploy of the original tale by sending the smallest first and begging the troll to let him pass as larger goats will soon be along providing an even bigger meal. From there all goes haywire as little billy goat turns the story on its ear with a surprise ending, for something has gone totally wrong in the environs of the upper pasture and while Big Billy Goat and the Troll are busy fighting it out little Billy Goat sounds the alarm that all is not well and that they should redirect their energies to preserve their world.

110 volts with drop cords, 60 to 90 minutes to set-up,12’ wide by 8’ deep performance area closed on the back side. Some performances require a darkened room. Hobey will provide all sound. A supply list for teacher and student workshops i

On-site in theaters, schools and libraries 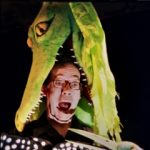 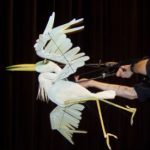 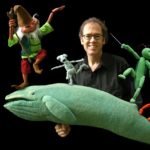 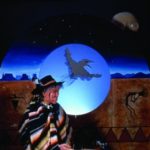